ABCs of DCGMS Library: V is for Visiting Authors

Today's ABCs of DCGMS Library is brought to you by the letter V for visiting authors.
Over the course of several months, four popular MG/YA authors visited the Des Moines metro area and surrounding parts of the state. First, Akata Witch author Nnedi Okorafor spoke at the inaugural Des Moines Book Festival in late March.

Okorafor, known for her fantasy and science fiction books for young adults and older readers, spoke about the political themes she sees in her stories, the characters who "speak" to her as she writes, her work with Marvel and writing graphic novels vs. prose/chapter books, and her work with the Black Panther series.

About a month later, author Laurie Halse Anderson spoke in West Des Moines about her newest book Shout and the 20th anniversary of the release of the ground-breaking book Speak, now also presented as a graphic novel. She continues to visit high schools across the country to talk with both girls and boys about how to treat one another, especially in close relationships. In May, author Jason Reynolds was in Dubuque, IA, and while it's a few hours from the Des Moines area, it's Jason Reynolds! The drive there and back was certainly worth it! 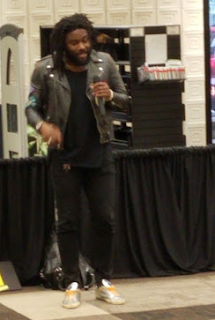 Reynolds spoke of his journey as a writer, and several questions from audience members were related to his work with the Track series. He indicated that many of his characters and stories are based on people and stories he knows and has lived.

Finally, in June, author Kwame Alexander was a keynote speaker at a state-wide reading and librarian conference in Ames, IA, where he challenged teachers and librarians to continue to promote reading with all students and to listen to students and their stories. He encouraged writing and poetry, and at the end of his presentation shared his new work with illustrator Kadir Nelson, The Undefeated. 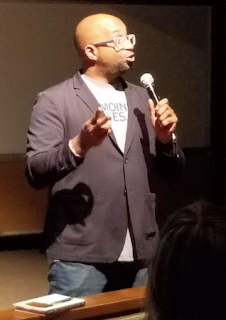 With each visit, I returned to the library and to my students with renewed excitement. I'm eager to see who may be visiting the Des Moines metro in the future!
Posted by Sandi Ellis at 8:05 AM