The Maze Runner series is one of the most popular in our library. Even though author James Dashner has left The Glade behind him, it's still a big part of his life--the movie based on the book will be released later this spring. Check out the trailer:

But that's not all he's been working on. His most recent book release last spring was The Eye of Minds. Here's what Booklist has to say about the book: 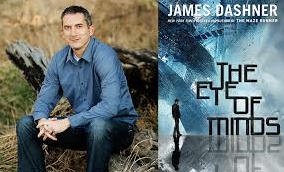 "In Dashner’s futuristic series starter, virtual life offers Michael opportunities to escape the real world. He spends most of his time on the Virtnet, playing Lifeblood Deep with his virtual friends Bryson and Sarah. Now, haunted by his daytime experiences, he needs them more than ever. What Michael fears most comes true: Virtual Network Security tracks him down, but not to chastise him for wrongdoing; rather, they want his hacking skills to get to Kaine, a gamer who is causing terrible tragedies. Michael and his friends begin the trek into the hand-to-hand combat warfare game Devils of Destruction, but with the virtual death of his friends, Michael finds himself alone in his quest. Harrowing evil and dastardly demons place themselves in his path, and he almost capitulates to the pain and exhaustion. What awaits him in the bowels of the game hangs over readers’ heads with each page turn, raising a constant question: Who is human and who is not? In typical Dashner style, this is quick and involving, with the main frustration being the wait time until the next book."

Dashner himself has been promoting both series recently, including this great interview where he talks about the worlds in each book and which he would prefer to live in.


Interested? We have all of the Maze Runner books in the library, and The Eye of Minds was recently added as well. Stop by to check out any of them!
Posted by Sandi Ellis at 3:20 PM

Email ThisBlogThis!Share to TwitterShare to FacebookShare to Pinterest
Labels: James Dashner, The Eye of Minds, The Maze Runner