Tuesday Title Talk: The False Prince in the Ascendance Trilogy by Jennifer Nielsen

Today's (late!) post is also a former Iowa Teen Award nominee and one of our favorite books here in the library: The False Prince by Jennifer Nielsen. This is the first book in the Ascendance Trilogy that also includes The Runaway King and The Shadow Throne. 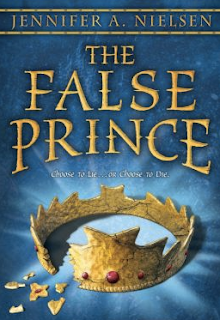 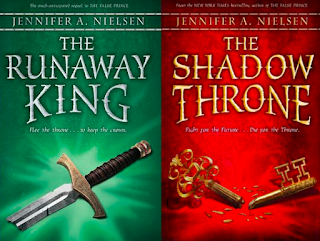 This is the first in a trilogy that follows four young orphan boys as they are pitted against one another to try to assume the thrown of the long-thought-gone crown prince. A scheming nobleman believes that if he can train one of these boys, he, too, can step into power and control the young "prince." Jaron, one of the orphans, isn't sure he wants to be a part of this traitorous plan, but readers will want to keep reading to learn of Jaron's own secrets.

Author Jennifer Nielsen has a website that features this series, as well as other books she's written, including The Mark of the Thief, her newest book which is also popular in the library.

If you're looking for adventure, revenge, mystery, and intrigue, the Ascendance Trilogy is a series to try!
Posted by Sandi Ellis at 8:11 AM