With the start of school just about one month away, it's time to showcase some of the new book purchases from the summertime!
Several of our new titles are series books--books that add to a series you might already love, series books by an author you might love, and graphic novels in series. For Moon Base Alpha and Spy School fans, the Stuart Gibbs FunJungle series will now be part of the library.
New books in the Unwanteds Quests series by Lisa McMann will also now be available in the library.
For those graphic novel fans, we've added to some of the GN series in the collection, including finishing out the Percy Jackson series and the Lumberjanes series.
Several favorite authors have new books out, as well, and we were fortunate to be able to get them added to the collection over the summer. Look for new titles by Margaret Peterson Haddix, Gordon Korman, April Henry, and Jason Reynolds. 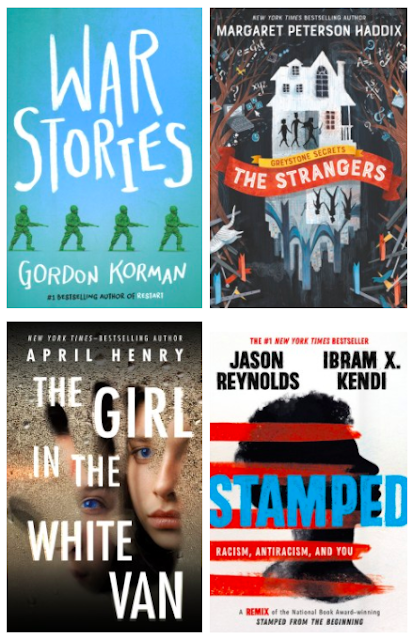 Looking to try something completely new--maybe by a new author or in a genre you're interested in? How about one of these?

Based on the author's first semester in sixth grade, Rex Ogle describes what it was like as he and his younger brother often went hungry, wore secondhand clothes, were short of school supplies, and was on his school's free lunch program. If you liked The Benefits of Being an Octopus or Crenshaw, this book is for you.

Want to try a survival story with a twist? Why not take a look at Dead Voices, a story about three friends who have to figure out how to escape from a haunted house.

Or maybe you'd like to read Clean Getaway by Nic Stone, the author of Dear Martin? This one tells the story of "Scoob" Lamar, who can't seem to stay out of trouble, especially at school. When he has the chance to road trip with his grandmother, he jumps at the chance. But this isn't your typical roadtrip story!
With almost 100 new books added to the collection this summer, you're sure to find something that interests you! Why not stop in to see what you can find!
Posted by Sandi Ellis at 4:35 PM