As hinted at last week in the Final Week Feature post, we'll also have a First Week Flashback post over the summertime. So...without further ado...we'll start things with flashback to Harry Potter Hump Day posts from this blog and Hunger Games posts since both series/franchises have new material! 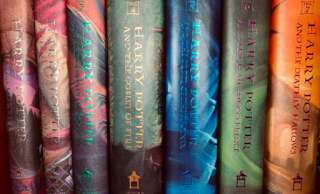 In the summertime of 2014, the blog posts featured different Harry Potter-related content. Looking for information about the Pottermore website? Or Harry Potter World? Online Harry Potter quizzes? All of those and more were part of the summertime blog reading. You can even see how J.K. Rowling planned some of the storytelling on notebook paper with notes and tables.
Over the course of the Hunger Games series in both written and cinematic form, we celebrated read-alikes and the release of the movies themselves.
Looking back on posts is all fine and good, but let's talk about the new material related to both series/authors! First, J.K. Rowling announced in late May that she was publishing online a new short story called The Ickabog.
On her website, Rowling explains that the story was one she wrote between Harry Potter novels and would read to her two children. She intends to publish online at least one chapter every weekday between May 26 and July 10 on the Ickabog website. Rowling also announced that there is an illustration competition for the publication of the story in November 2020. You can find out more about the competition HERE. Finally, Rowling has said that all royalties from the sale of the book later this year will be donated to those who have been affected by the coronavirus.
The other big news is that a prequel to the Hunger Games series called The Ballad of Songbirds and Snakes was released in mid-May.
This book is from President Snow's perspective as a young man who serves as a student mentor in the tenth Hunger Games. Click on the link below the image to watch the official trailer from Scholastic:
Sounds intriguing? Stop by the library when school resumes to check out The Ballad of Songbirds and Snakes from Suzanne Collins.
Posted by Sandi Ellis at 1:18 PM