There's no getting around it--The Hunger Games continues to be one of the most popular book series. With the Catching Fire movie coming out this fall, the series' popularity isn't lessening any time soon. If you liked the books and want to try some others like it, you might be interested in these series. (You can also CLICK HERE to see an earlier blog post about similar titles.) 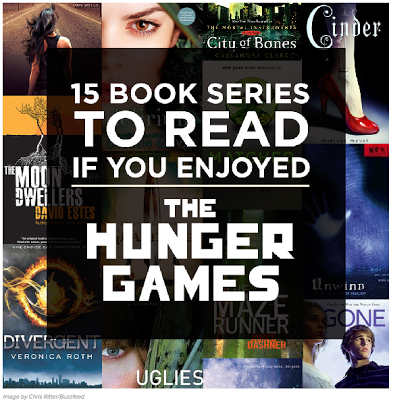 In this dystopian series, five factions control the country. Triss leaves her family faction to join Dauntless, where she meets Four. Everyone has secrets, and things are not as they seem--even Triss's choice to join Dauntless. The Divergent movie comes out in 2014, and Allegiant, the next in the series, will be released in October 2013.

Katsa is a Graceling--a person with extraordinary abilities who is often an outcast. Follow her story as her uncle tries to use her killing skills to attain even more power in the kingdom. Bitterblue is the direct sequel to Graceling while Fire is a companion novel that tells the story of Fire, an unusual girl from a different kingdom but with a tie to the events and characters in Graceling and Bitterblue.

Everyone in Perdido Beach disappears, or "poofs" when they hit their 15th birthdays. That leaves adolescents and children to carry on/survive and try to figure out what has happened to them. Adding to the mystery are an energy field that surrounds the entire town and the supernatural powers that some of the children develop. Power struggles and mysteries abound!


Life As We Knew It/The Dead and the Gone/This World We Live In,
Susan Beth Pfeffer

When the moon is pushed closer to the Earth after a meteor strikes it, the people on Earth are unprepared for the tsunamis, volcanic eruptions, shorter growing seasons, and changes in atmospheric conditions. The first two books follow different families in different settings, but the third book finds them together in a struggle to survive and attempt to resume normal lives.

Want to know more about additional similar titles? You can check out Buzz Feed's entire list when you CLICK HERE.
Posted by Sandi Ellis at 11:30 AM