Here's the latest display in the library, and as you can see, it features several of our popular titles: 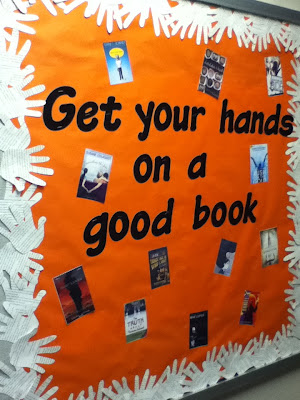 According to Destiny Quest, two of the most popular titles in circulation include Artichoke's Heart and The Truth About Truman School, both of which are Iowa Teen Award nominees. Also included in the top 10 is The Dangerous Days of Daniel X, a good choice if you liked I Am Number Four. Two graphic novels are on the list: Anya's Ghost and Maximum Ride 1. Two books with severals holds placed on them also made the list: Things That Go Bump in the Night and Something Like Fate. With so many featured on the board, it's likely you've read a few of them--why not try a few more? :)