War-time setting are always popular with historical fiction, and this week's titles are no exception. Both The Dollmaker of Krakow and Four-Four-Two are set during World War II; however, The Dollmaker of Krakow is also a bit of a fairy tale or fantasy set against the atrocities Jews in Krakow faced, and Four-Four-Two explores the same time period from a soldier's perspective. Another war story in this week's group of recommendations is A Soldier's Heart by Gary Paulsen. This book tells the story of Charley Goddard, a 15-year-old from Minnesota who fights in 4 of the 5 most deadly battles in the American Civil War. In reality, Goddard didn't fight in all 4 of these battles, but don't let that bit of artistic license stop you from reading about the harrowing experience of war for the teenager.

If you're looking for historical fiction that isn't tied to a war, All the Broken Pieces and I Survived the Great Chicago Fire, 1871 might interest you. Set in the years following the Vietnam War, All the Broken Pieces is a novel in verse and sports story that combines war guilt, baseball, and families. The focus on family is also part of the story in I Survived the Great Chicago Fire, 1871. If you've read other books in the I Survived series, you will likely enjoy this one, too!

If historical fiction is a genre you like, stop by and we'll talk about other titles you may want to try! See you soon!
Posted by Sandi Ellis at 5:03 AM No comments:

We're on the downward slide of summer heading into August and the start of school, but summer reading suggestions keep coming! This week the focus is on mythology.
Students often gravitate to the Roman and Greek myths, and many YA novels are popular because the story has a base in those ancient stories. The Percy Jackson series and its continued popularity is certainly proof of that, along with many other series by Rick Riordan. Who Let the Gods Out? also features Greek mythology; however, if you're looking to read stories with a basis in mythology from other places, you might try the others featured above. While most of the books shown are in a series, The Scorpio Races is not, so if you're looking for a stand-along title (and a *great* read!), you might want to try that one. Series or stand-alone, Greek mythology or not, all of these make summer reading--or any time reading!--more enjoyable!
Posted by Sandi Ellis at 2:59 PM No comments:

We're halfway through our summer reading book recommendations (What?!), and this week we feature some of the most popular series books in our library. 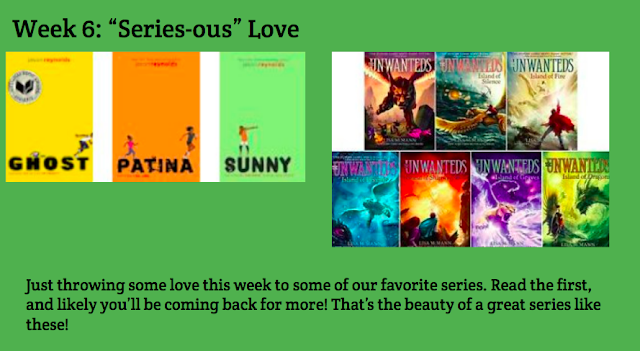 The recommendations include The Track Series by Jason Reynolds, a new series about an elite track team, with each new book telling a different member's story; the magical Unwanteds series; the classic retellings of The Lunar Chronicles focused on a new retelling with each new book; the historical fiction War That Saved My Life series that focuses on an unusual aspect of WWII; and The Grisha Trilogy, dark magic and hard choices at their best.

Any of these summer reading suggestions could keep you busy reading until school starts--or we'd love to see you in August to put Book 1 in your hands! See you then!

Posted by Sandi Ellis at 5:49 AM No comments:

This week we're recommending novels in verse--books that look like poems on the page rather than full paragraphs.

Like previous recommendations, these books include different genres--realistic fiction and historical fiction--and feature families in crisis or families with unusual circumstances or family conflicts needing resolution. If you're looking for engaging stories, why not look for these at your public library this summer or stop by in August--we'd love to hear what you think after you've read it!

Summer isn't over yet, so stay tuned for more recommendations here and on Twitter: ccls531. Happy reading!
Posted by Sandi Ellis at 8:13 AM No comments: